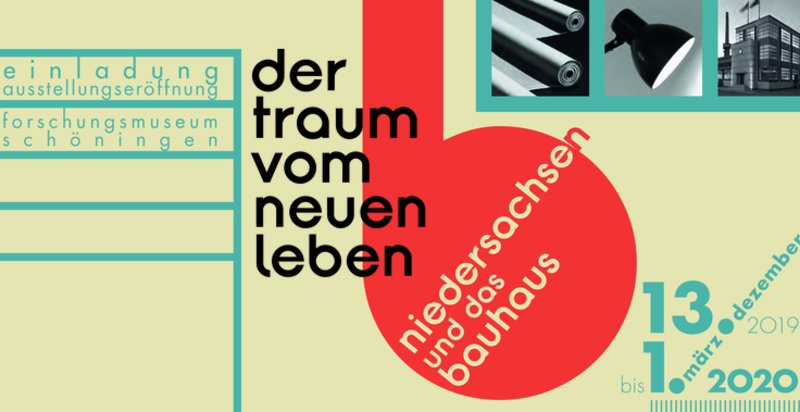 The Bauhaus was not located in Lower Saxony. But its dreams became reality here. The exhibition "Der Traum von neuen Leben - Niedersachsen und das Bauhaus" of the Lower Saxony State Parliament in cooperation with the Ministry of Science and Culture goes on a search for traces of Bauhaus in Niedersachsen. It will be on display at the Forschungsmuseum Schöningen from December 13.

The year 2019 was marked by the 100th anniversary of the founding of the Bauhaus. An exhibition of the Lower Saxony State Heritage Service (NLD) has inspired numerous visitors on its stops in Hanover, Wolfsburg, Osnabrück, Bad Pyrmont, Worpswede, Celle, Alfeld, Braunschweig and Oldenburg. At the end of the year, the NLD is now presenting an exhibition by the Lower Saxony State Parliament in cooperation with the Ministry of Science and Culture at the Schöningen Research Museum, which is also dedicated to the topic.

Numerous students of the Bauhaus came from Lower Saxony, and some of them found work and a home here. Could Walter Gropius have founded the important school for architecture, design and art in the 20th century in Weimar without the fame for his design of the Fagus factory in Alfeld? What would the Bauhaus be without the wallpapers of the Rasch company, manufactured in Bramsche near Osnabrück? The Fürstenberg porcelain factory would be poorer by a timeless porcelain service without the Bremen Bauhaus graduate Wilhelm Wagenfeld. And these are by no means all the traces of the Bauhaus in Lower Saxony: lamps, inkwells, works of art and many modernist buildings that can be found throughout the state would not have been created without the influence of the art school in Weimar, Dessau and Berlin.

The centerpiece of the exhibition is the floor plan of an apartment of 43 square meters for four people, printed on a carpet. It was designed by the architect Otto Haesler from Celle in 1930, during the Great Depression, and was intended to cover the subsistence minimum. Haesler stated, "One does not live in order to house, but one houses in order to be able to live better." The phrase couldn't be more timely in light of rapidly rising rents. And so, even after 100 years, many Bauhaus ideas are as present as ever and continue to have an impact today - not least in Lower Saxony. The exhibition, which will be on show at the Forschungsmuseum Schöningen from December 13, 2019 to March 1, 2020, aims to make this dream of a new life for the Bauhäusler literally tangible - especially for the younger generation.